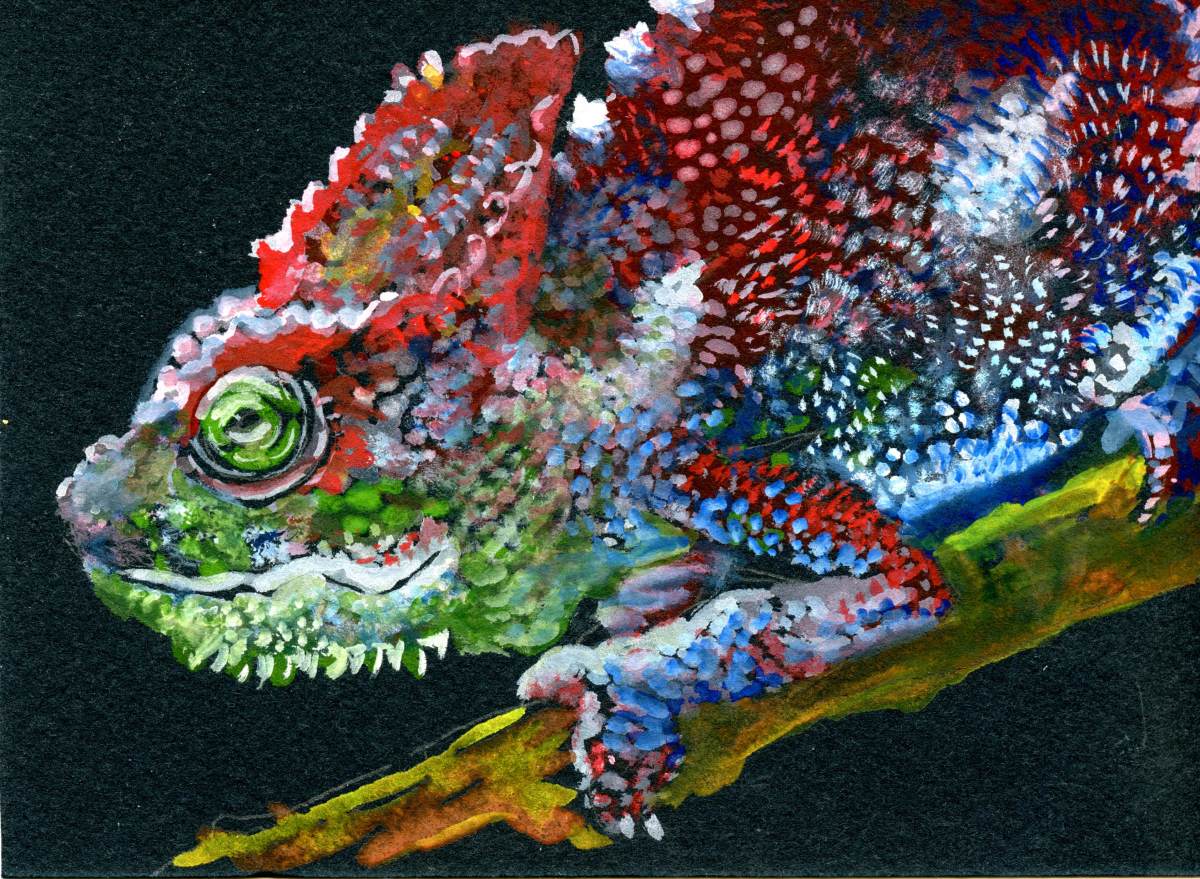 Today, my hubby took a Chameleon in his lunchbag. Doodlewash prompt ‘Chameleon’.

Chameleons are interesting critturs. Just a few of fun facts about them:

They don’t change color according to their environment. In fact, different species change color for different reasons. Some for anger or fear, while others respond to light, temperature or humidity.

They change color via nanocrystals – two layers of specialized cells under their skin.

Their tongues can be 2.5 times their body length.

Almost half of the chameleon species live in Madagascar.

The smaller the chameleon, the faster the tongue. They’ve been clocked at 8500 feet per second.

Their spit is super sticky!

They do not have ear openings, but they are not deaf. They can detect sound frequencies in the range of 200 – 600 Hz.

They never stop growing during their lifespan.

They see better than humans, with vision in both visible and ultraviolet light.

This is a case where the scan looks better than the actual piece. I picked up a glow that isn’t really there.

I used watercolor on black paper. I’ve done this successfully before, but I don’t think it was the right combination for the what I was trying to do. I just kept fussing and finally decided I need to walk away. I think I’ll start over rather than trying to get this to go the way I want it too.

But now I know!

Today, my hubby took a duck in his lunchbag.

You know, I was actually trying to find an Australian Shelduck, hence the fiery sky in the background. Then when I went to look up some facts, I realized the Pixabay reference photo I was using was of a Ruddy Shelduck, who only visits Australia via the zoo.

Found in NW Africa and Ethiopia, with a breeding area in SE Europe across central Asia to SE China, this duck is your pretty average duck, although they have a honk and resemble a goose in the air.

Today, my hubby took a lava lamp in his lunchbag.

Odd thing for hubby’s lunchbag postcards, but I was really inspired to try and catch the light in a lava lamp so I went for it. I’ll set this one aside and keep it for one of those days when I’m sick or can’t get a card done for some reason.

Today, my hubby took a parrotfish in his lunchbag.

Doodlewash prompt ‘parrot’. I wasn’t in the mood to paint parrots, but I was into the idea of trying to get that neon glow that parrotfish have.

I went for a stylization and I like the effect I got. I want to do a larger version, though, where I can give the colors more room to play. 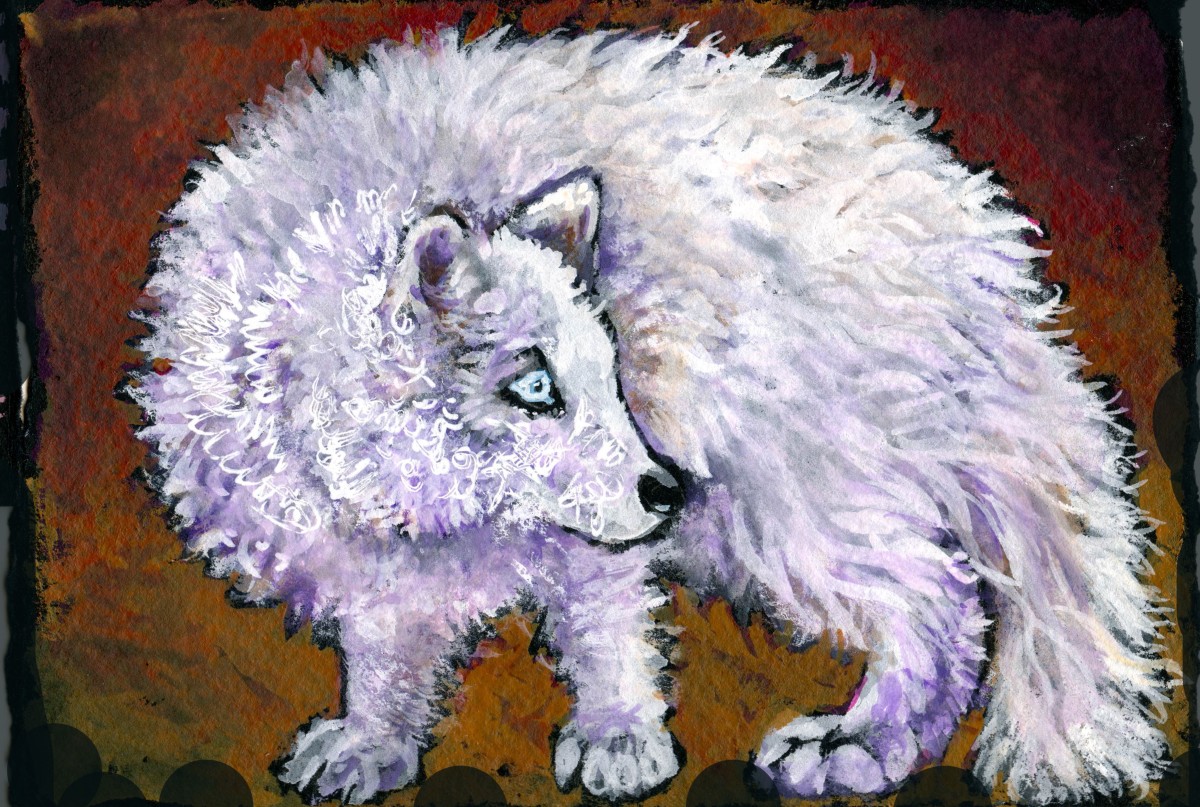 Today, my hubby took a fox in his lunchbag.

I actually painted this a while ago. It was one of my first test with Da Vinci’s gouache. I had to try that brand. Their tubes come in 37 ml tubes and are priced much the same as the 14-15 ml tubes from other brands. 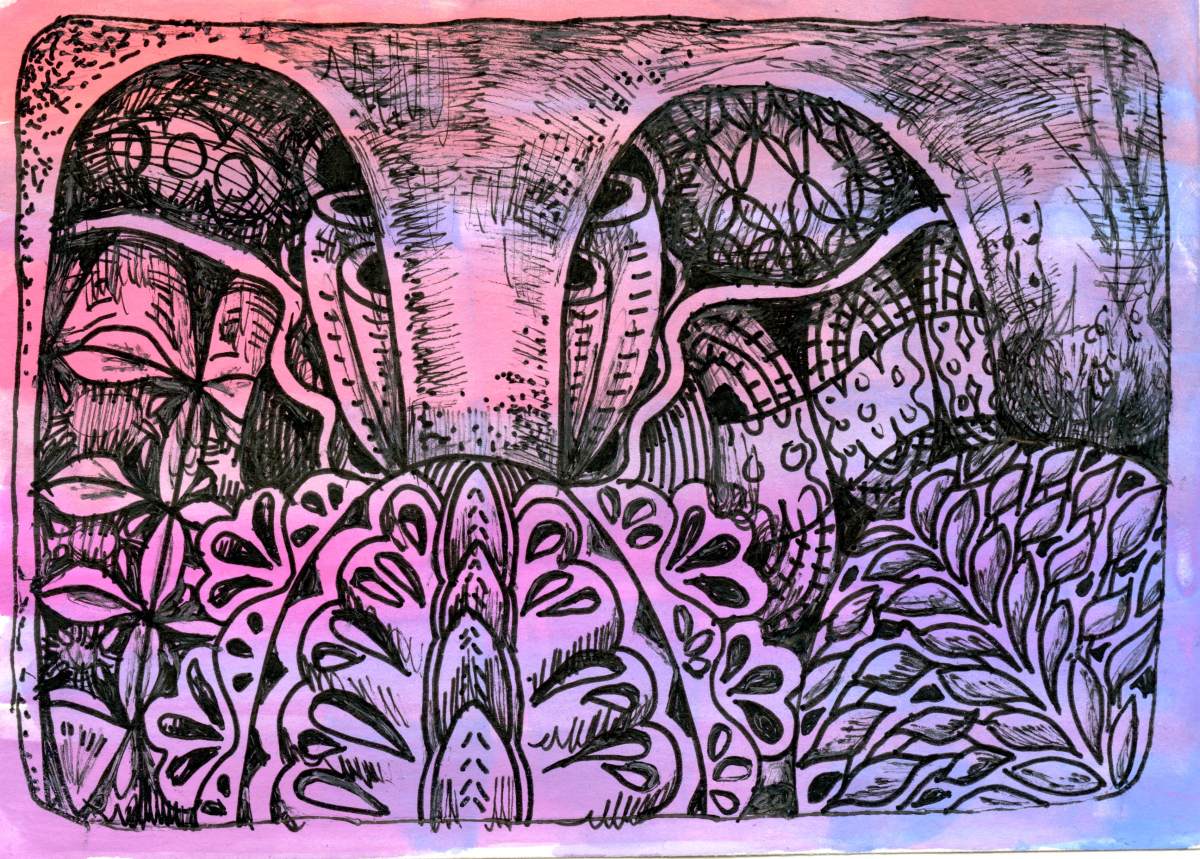 Yesterday, in Part 1 of this review, I discussed the White Nights Pastel Watercolours in general. Today, I’m going to show you what happened when I tried to draw over the paint with technical pen.

My first thought when I saw these colors is that they would be fabulous to use as backgrounds for technical pen drawings and tangles. The colors had a somewhat chalky feel (not look) once the paint dried, though. I almost expected it to rub off easily, but it doesn’t.

At first, everything seemed fine, but then the ink stopped flowing very well. I wiped off the nib, and it was okay for a while, but started having problems again.

The Zebra’s a pretty sturdy pen, but it does have a fabric nib, and those can clog.

I switched to a Micron PN (plastic nib) 0.8 technical pen and moved on to the next background.

The situation was much the same – the plastic nib worked fine for a while then it became harder and harder to get the ink to flow. The Aqua Black paper is pretty soft, and I thought it might be at least part of the problem. I decided to switch to the background I did on white Nostalgie paper. It has a much smoother, harder surface.

The pen worked a little better on this paper; it took longer before the flow clogged up. But clog up it did. For grins, I switched to the Zensations with its fabric tip. I kept going, switching between the two pens. My line work was clumsier than usual because I was trying to get that ink to flow!

Eventually, both pens stopped working altogether. I may be able to get them working again, but they’ll never give me crisp flowing lines again.

*sigh* But these are such beautiful colors. I’ll know not to plan to draw over them with technical pen, but you’ll be seeing them a lot used in other ways because I like them!