Schmincke Horadam offers a Limited Edition tin of 12 colors each year.  It comes in one of their signature tins (love the owl logo!)

EDITED: In this review, I mentioned problems that I had with the tin. I felt I had probably just received the lemon in the bunch, but it turns out that it is a production problem.  Schmincke has responded.  You can read about the resolution of the problem here.

And I have to add that I bought my set through Wet Paint Art.  They are being SO responsive. Response to complaints on the issue are almost immediate and they give you a thorough answer as to what happened and what action is being taken.  If you learn nothing else from this review, remember that Wet Paint Art is an excellent store for buying art supplies.  Good customer service is worth it’s weight in gold

I’ve also spoken with Schmincke Horadam and am being sent two replacement tins. 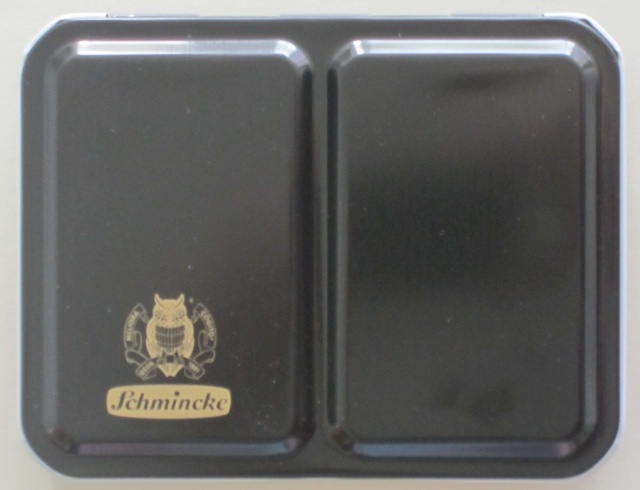 These are all single pigment colors.  The only one I already had was Viridian, so I was very pleased. 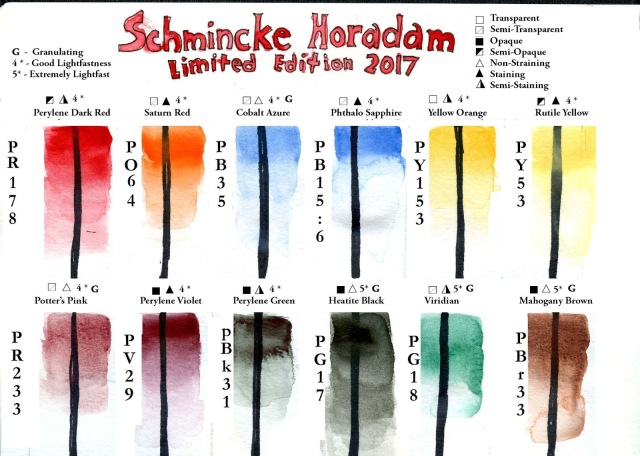 I wasn’t as pleased with the tin.  Some of the issues won’t matter to some people and will to others.  I’m pretty picky about mine.

Comparing it to an older one, the metal is thinner and it does that popping in and out thing with very little pressure.

The support ring on the bottom sticks out.  I does flatten when you set the tin down, but I don’t use them (they’re meant for you to slide your thumb into to help you hold onto the palette while painting in the field), and I find it in the way like this.  The ring should be easy to remove though.

The bottom has non-skid bumps to help with stability, but …

… the mixing lid doesn’t lie flat, so when you are mixing or picking up paint, the lid goes down, and the rest of the tin goes up and so much for stability.  Again, the older version (not sure how much older) of the tin did not have this problem.

The other thing that I didn’t like was discovered the first time I used the tin.  As I was wiping off the paint, I noticed some spots on the lid.  Some of the enamel had flaked off.  All I used was a soft brush for painting and a wet paper towel to clean off the paint.  I’m going to contact Schmincke about this.  I probably just got a lemon, but they’ll want to know in case it is a production problem. *Edit: It turned out to be a production problem. 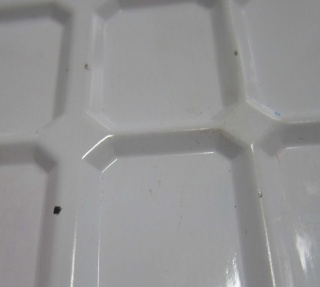 The double indentation in the lid is designed to fit snugly between the wells in the wing.  Unfortunately, I like to paint a chart showing the layout and colors in a palette, and with those indentations even a thin sheet (80 lb) of watercolor paper keeps the lid from closing all the way. 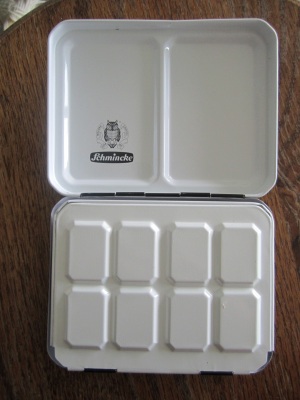 The tin does have good features. The wing has 8 wells for mixing. 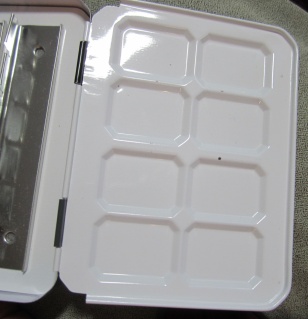 The set comes with 12 colors, but the removable tray has room for 18 half pans, so the set can be customized if you want to add more colors.  Or you could leave the tray out and fit even more pans inside.

The wing is beveled on three edges, but not the inside edge.  That edge isn’t very sharp so I don’t think it would be easy to cut yourself on it.  To be truthful though, I don’t find too many tins that are beveled all the way around, and with many the fold-out wing is not beveled at all, so this is a step up in that regard.

Of course, the important thing is the paint.  I love the colors, especially the Rutile Yellow and Cobalt Azure.  And the Perylene Violet.  And the Perylene Green – it has such a dark value!  Something that can be hard to get with watercolors.

I found that you do need to wet the colors and let it soak in  if you want the darkest values.

And the colors have a nice range.  I adapted a free tutorial from Joe Cibere to test out the paints.  It’s a great test of both paper and paints and fun to do.

I let the colors mingle all over and did some heavy lifting just to see what worked and what didn’t, so it got a bit muddy in places, but I like the way the colors from this set work together. 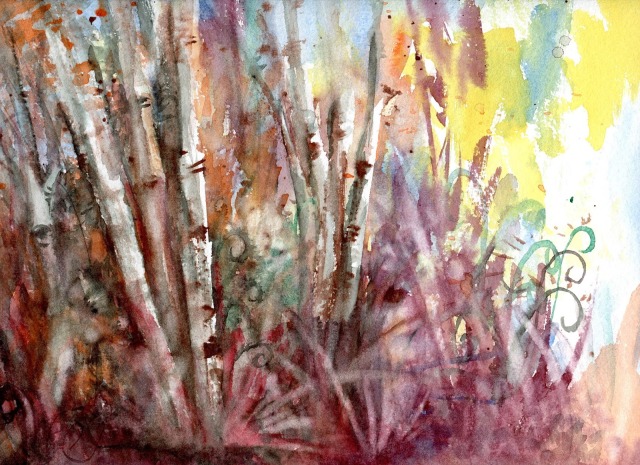 There is a distinct color shift, so you need to really load up your brush if you want darker tones.  I like this because it means you can get a good range of values. 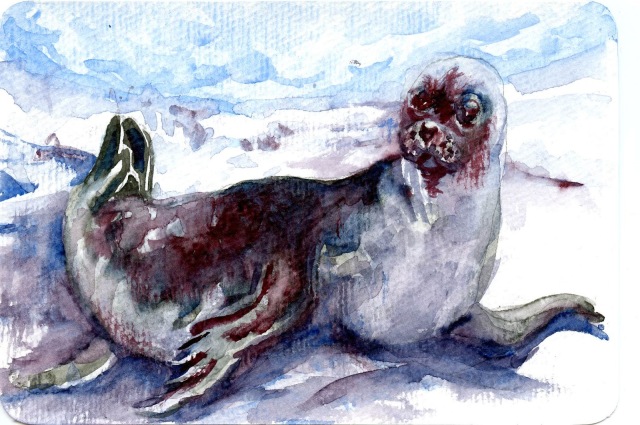 Overall, Schmincke Limited Edition 12-color Palette set for 2017 has a good selection of single pigment colors that aren’t easily found in other sets.  Although, there are some good features, there were production problems with the tin such as flaking enamel and poor construction.
Edited (again) : As I noted in the beginning, it does turn out that the tin problems were a production problem.  I’ve also found that many people don’t agree with my assessment of the colors, finding them flat.  I’ve also had one of the colors collapse in the middle so that it looks like a pan that’s been used heavily for months.
I do like the colors, and I still don’t regret buying the set.  However, with all the problems that have been found I don’t think I can recommend it (though I do recommend the colors, themselves).  The set has been sold out at the moment and a second set is planned, once the issues have been resolved.  Both Wet Paint and Schmincke have been very responsive in answering emails regarding the problem.  It remains to be seen what will be done.  If you are interested in the second set, I would do further research to make sure the problems were addressed.
You can find out more about this set at the Just Add Water, Silly blog. And if you are interested in the set, the first batch sold out in a week.  A second batch is now available for pre-order.  You can read more about that here.

Artist Ambassador for Zebra Pens. I'm a self-taught artist who dances about with all sorts of artistic mediums. My main loves are Watercolor, Zentangle and Ballpoint pen. The subjects of my work are many and varied and change at whim. I'm a little bit crazy, but doesn't that come with being an artist? At my Life Imitates Doodles Blog, I post a list of resource links for Tangles, Tutorials and Giveaways two times a week. I also write reviews, hold giveaways and share my art work. View all posts by Life Imitates Doodles Art, Reviews & Tutorials