Last night I had what I like to call an Encounter of the 3rd Mind.

You know, when you’re tired but determined to create something anyway.  And you’re half-watching a TV show, and the phone keeps ringing, and your husband keeps asking you questions about the TV show you are only half-watching.

It’s a recipe for making mistakes and I did.  But I went on to create two more triads, and ended liking the mistake best of all.  It’s an Encounter of the 3rd Mind–forces outside yourself taking control and creating art.  Or an artlike substance, anyway.

My Oopsie, the Un-Triad:  I was trying for Nita Leland’s Modern (High Intensity) Triad and loaded my brush with Phthalo Green (Blue Shade) instead of Phthalo Blue (Green Shade).  Easy enough mistake.  The problem was that I’d already put down the Quinacridone Magenta and I only had a little bit of that.  Well, POODLE! I wanted that Quin Magenta for my Modern High Intensity Triad. *insert snitfit here*

So now add cranky to my list of distractions.  No way I was going to waste the page in my book, so I decided (crankily-that’s important) to switch to Rhodonite Genuine, which is similar enough for a botched experiment.  But I was cranky, and not paying attention.  And didn’t notice that my palette was upside down from usual.  So I loaded up with Quinacridone Burnt Orange.  Heh.

After a Huh??!!! I realized what I’d done, and switched to the Rhodonite Genuine.  Then I did another layer of Azo Yellow, and gosh!  I kind of liked it, and let it be.  Just me, but I think sometimes 2 wrongs can make a right.

But.  I still wanted my Modern (High Intensity) triad (I can be very stubborn).  Unfortunately, I really didn’t have enough Quinacridone Magenta.  This is almost the same mix of color that I used yesterday for the triad from my watercolor class.  I was using dried nuggets, and did get a much paler, less powerful color.  But I probably could have worked it up to the same brilliance if I’d had more paint.
And I lost control of the paint using too much water at one point.  *grumble, grumble, grumble*  But I decided to change things up by using a ‘Dahlia’ look instead of circles.  YaY!  That worked.   I’ve got to get some Quin Magenta and try this one again. (No! No!  I won’t buy more watercolor!)
Colors: Quinacridone Magenta, Azo Yellow, Phthalo Blue (Green Shade).

I knew if I quit at this point, I’d toss and turn all night, thinking of how I might improve the process.  I turned off the TV, Hubby went to bed, and I focused.
I still like my mistake Un-Triad better, but with Nita Leland’s Modern (Low Intensity) Triad, I achieved what I was going for.  Maybe not as satisfactory in the long run, but definitely the recipe for a good night’s sleep.
Colors: Perylen Maroon, Quinacridone Gold, Indanthrone Blue 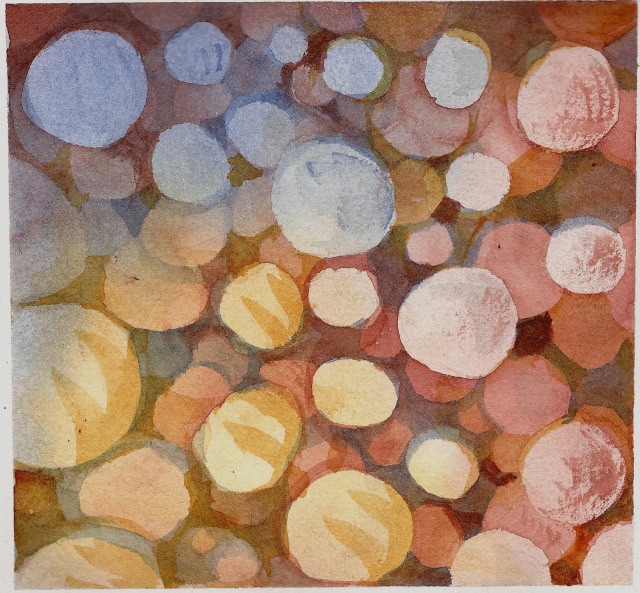