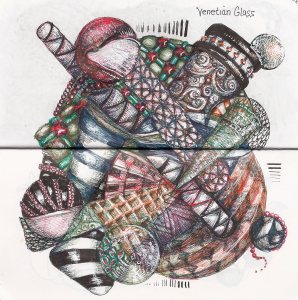 There are frequent questions about shading in various zentangle/zendoodle forums, and many people ask me specifically about the shading that I do, using pen.  I’ve thought long about writing up instructions, but it didn’t seem right for zens.  I never think about my shading.  I’ve done it for so long, and it’s great fun, because you can go all Escher and baffle brains.  But, if you don’t know anything about shading, going in, then it’s a complex subject.

How can you zen while worrying about light direction, the 7 types of line, distance…well, it hit me.

These are zens, right?  You learn them by doing.  Molly Hollibaugh’s Strircles started me in the right direction.  I created two tangles, Contour and Spot, that incorporate very basic shading.  They can be done standalone in a space or incorporated into other tangles.

CONTOUR
Put simply, Contour is a series of slightly slanted lines, roughly even in length and spacing, that follow the shape of another line.  It’s easier to see than to explain, so I’ve contoured some lines.

Here is an example of the official tangle Keeko that has been contoured.

Warning:  Do NOT get hung up on making Contour lines exactly even.  Close enough counts in Horseshoes, Hand grenades, and Contour.

SPOT
Spot is actually a highlight rather than shading. It is a light spot surrounded by a graduation of darker tones. You lay down solid black/color on all sides, and gradually get lighter by feathering the black/color.  You can use Contour to feather, or a smudged pencil such as you commonly use with zens.

You can vary the look by the amount of light versus the amount of darker tones. If you are using color or working on a colored background, a white gel pen used at the lightest point really makes Spot stand out.

Here’s an example of both Contour and Spot, using the official tangle, Striping. 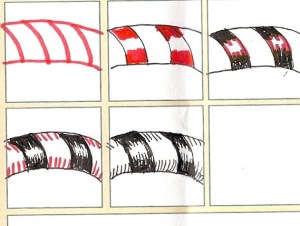 I used Contour for shading but you could also use a pencil to shade instead of drawing the lines.

Now, here’s a couple of other new tangles that incorporate Contour and/or Spot.
BEEDIT

…and, just because the Pikrust spots reminded me of a fat bird, here is…
FATKRO

Whew!  Is that enough?

Let me know if you are interested in anything more like this, and I’ll listen to my brain to see what it comes up with.